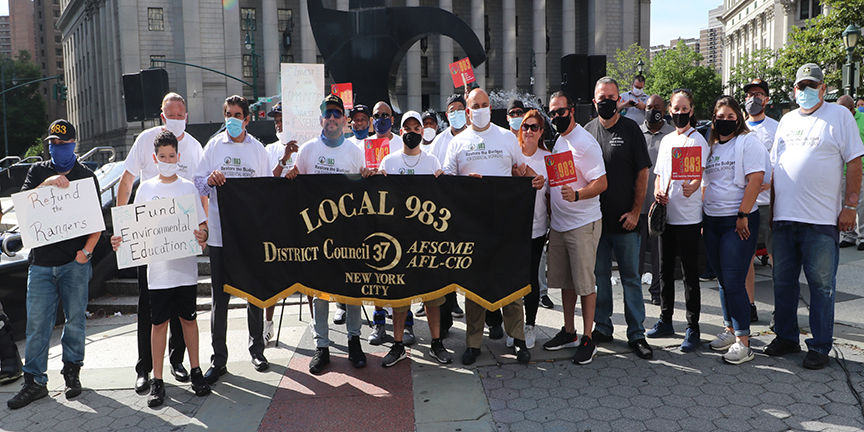 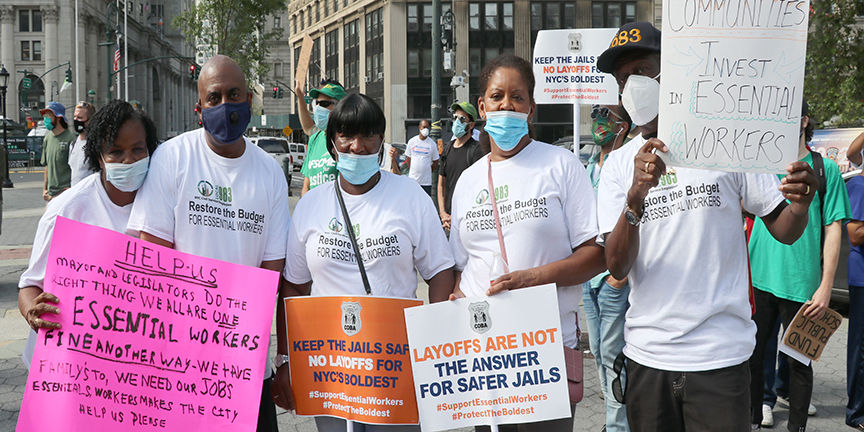 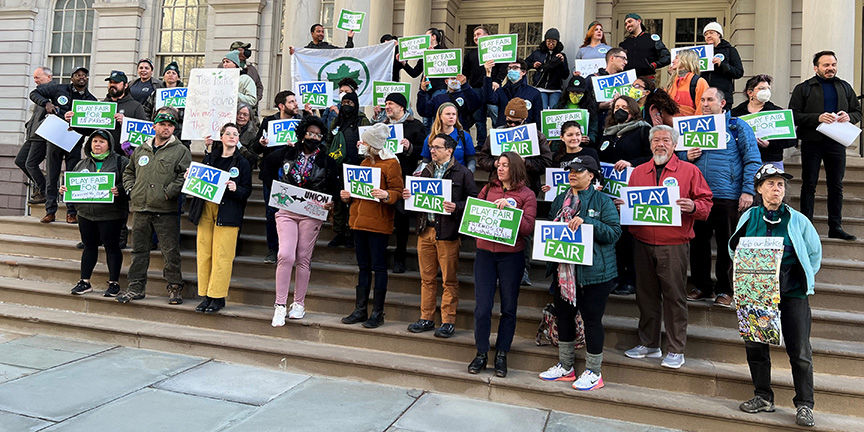 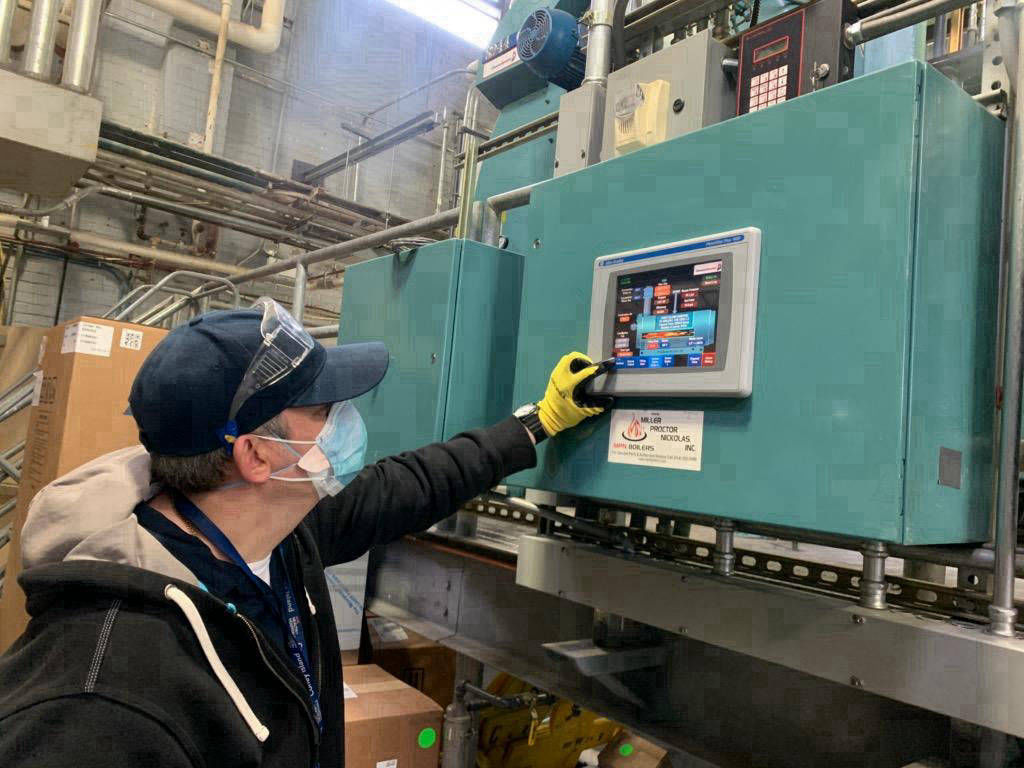 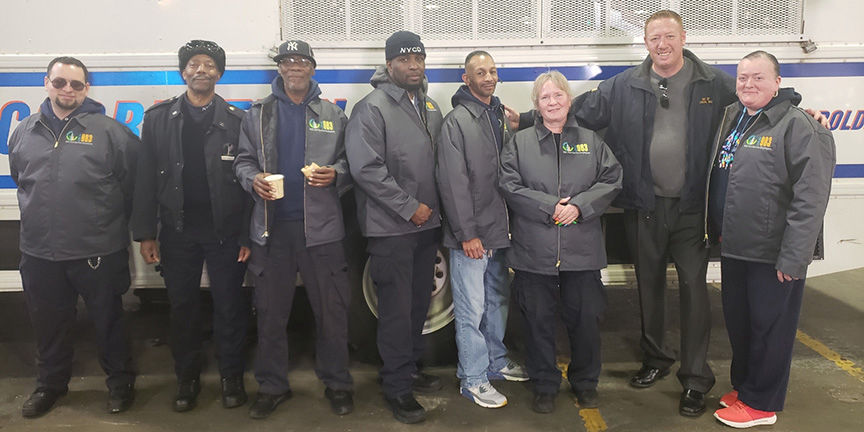 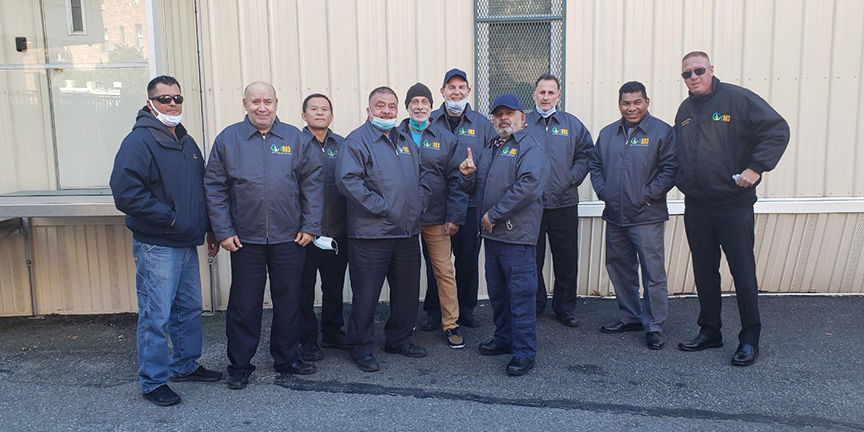 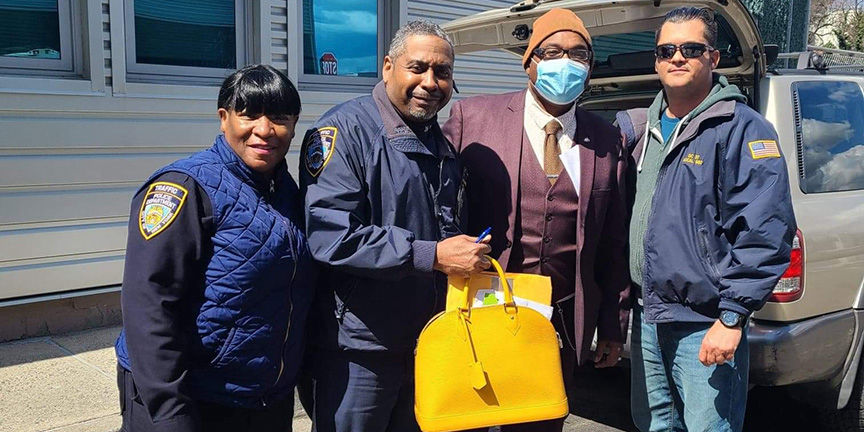 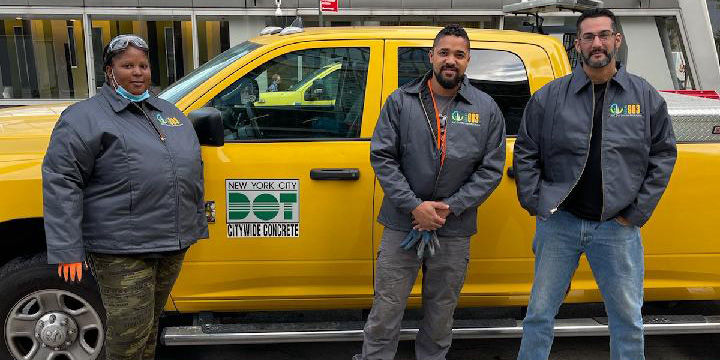 Due to the risk of COVID, the Local 983 Election Committee decided to conduct the election both virtually and in person on June 14, 2022. Under this plan, members would have been able to choose the method of voting that best worked for them individually -- vote in person, on the internet, or via phone. This would have given members who didn’t want to vote in person due to the risks of COVID the chance to still vote.

On July 19, a panel of five Appellate Division of the Supreme Court judges issued an order saying that the judge who issued the June 10 order could not set a date for the election until the Election Committee’s appeal was decided.

To be clear, the Election Plan we submitted was done with the strong objection of the Election Committee, which believes that the court had no power to restrict voting to in-person only. We believe that by disallowing any other form of voting, and by compelling in-person voting, the court is putting members at risk of exposing themselves to COVID if they want to vote. However, because the Election Committee has a duty to follow the June 10 Order, we issued an Election Plan that obeyed that order.

While the Election Committee submitted the Election Plan, it did so “without prejudice to its pending appeal and pending motion under CPLR Section 5519.” In plain talk, that means that the Election Committee submitted the Election Plan because the court ordered us to do so in the June 10 Order, but we did not give up our legal arguments that the June 10 Order was wrongly decided. Since both the June 23 and July 19 orders of the Appellate Division of the Supreme Court said that the lower court cannot set a date for the election, as of today, no election date has been set.

On July 20, the lawyer representing Jolifer Noe, Carmen Rodriguez, Nativa Palmer, Eric Auguste, and Richard Rivera asked the judge who issued the June 10 order to force the Election Committee to hold the election on August 18, and to force members to vote in-person if they want to vote.

The Election Committee opposed that request for two reasons:

The Election Committee still thinks it is wrong to force members to vote in-person because doing so will put members at risk of COVID exposure. We think that members should be able to vote remotely if they want to; it’s the safer option and it’s not forbidden by the Local 983 or AFSCME constitutions.

The July 19 order of the Appellate Division of the Supreme Court's forbids the judge from setting an election date until it decides on the Election Committee’s appeal of the June 10 order, and that has not yet happened.

On July 26, the judge who issued the June 10 order heard arguments from the lawyers, agreed with the Election Committee, and decided that he did not have the power to order an election be held on August 18.

What does this all mean for you, the Local 983 member?

Second, it means that the Election Committee is still fighting for you, the members, to be allowed to vote remotely, and fighting against the attempt by Jolifer Noe, Carmen Rodriguez, Nativa Palmer, Eric Auguste, and Richard Rivera to force members to vote in-person. The Election Committee is doing this because we do not want a single member to catch COVID while waiting online to vote. We believe the Local 983 and AFSCME constitutions do not forbid remote voting.

Finally, it means that the Appellate Division of the Supreme Court will decide whether the judge who issued the June 10 order was right to do so. Until then, no election date will be set.

We will update you when we get more information.

If your dream is to become a park ranger, now's your chance! The city is hiring 50 Urban Park Rangers to help bring fun
and educational nature and wildlife programs to our parks. Plus, the hat is really cool.
Apply Here >>

The next general membership meeting is Tuesday, Nov. 1  at 6 P.M.

All information about membership meetings and other Local 983 events can be found on the calendar page.

To join, please complete the consent retainer found by clicking below.

In compliance with a June 10, 2022, order issued by Supreme Court, New York County, the Local 983 election of officers previously scheduled for June 14, 2022, will not be going forward on that date. The Local Election Committee will be communicating with the membership in the near future regarding when the election will be held and the details of how it will be held.

“We would probably be making 33% more in wages if we didn’t have to make the concessions to hold on to the health care for all these years,” said Joe Puleo, president of Local 983, which represents thousands of blue-collar workers. “A lot of our members don’t realize how it works, how these benefits are funded. They think the city just voluntarily picks up the tab.”

BIDEN CANCELS UP to $20K in STUDENT LOAN DEBT and EXTENDS FORBEARANCE to JAN. 1, 2023

More than one-third of people riding motorized two-wheelers on the Big Apple’s protected bike lanes and greenways speed dangerously, an analysis by The Post found.

New York City’s years-long effort to shift retired city workers to a cost-cutting health care plan was dealt a major blow Monday when the insurer in charge of running the plan announced that it is withdrawing from the deal.

By dialing only three numbers, anyone can now reach the National Suicide Prevention Lifeline for mental health crises.

A 2003 EPA Inspector General report held the EPA accountable for mischaracterizing the air quality in lower Manhattan as "safe to breathe."

200 entry level workers were slated to be terminated at the end of the fiscal year. They had originally been hired as part of Mayor de Blasio New Deal-inspired City Cleanup Corp that was funded with American Rescue Plan funds from Washington that were temporary.

We are asking our traffic family to come together once again to help one of our own, TEA 3 Roderick Holder, who was suspended by NYPD while towing in the 42 PCT area. Brother Holder declined a direct order to tow a vehicle under a Bogus NO Parking Anytime sign nailed to a tree. If you would like to contribute to help our union brother, call our Local 983 Bronx Tow Shop Steward Sandra Lynch at 917.796.2645. Any amount will be appreciated. Donations are not for legal assistance as Local 983 has already assigned him legal counsel. In Solidarity! 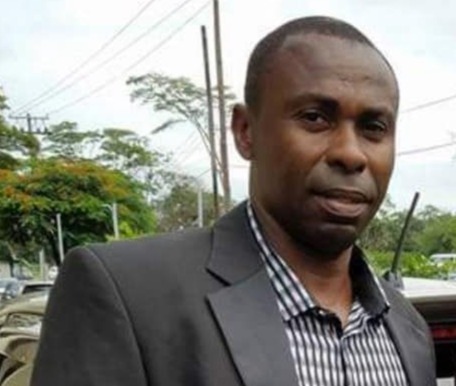 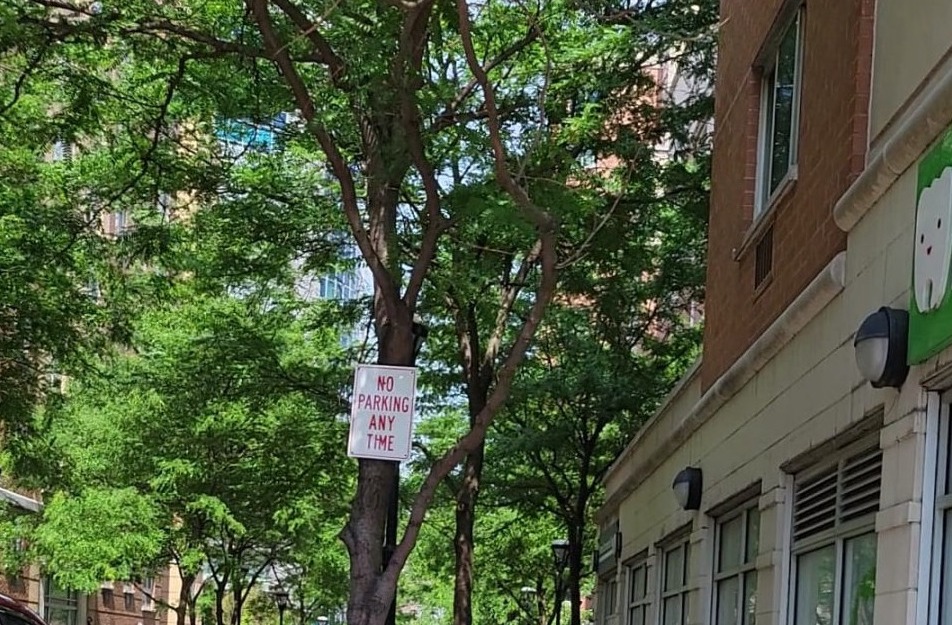 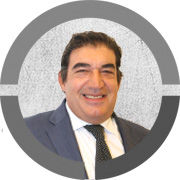 Almost a year ago, the Executive Board met to discuss how we could better improve our communication and outreach with members, especially since we are scattered throughout so many different agencies in all five boroughs. We had already implemented numerous changes, but believed we could do more. In the previous couple of years, we started a newsletter that we published periodically to bring members up to date on important news. However, print is not as timely as we would like, and we discovered that most of those stories were more feature than news. We also started making better use of the Local 983 social media outlets, but found we could not provide as much information on them as we needed. That left us with our website; however, that was outdated and not very user friendly.

So, here we are, with a new website we are really proud of that provides our members with all the information that they previously needed to contact the Local 983 office to obtain. While the entire site is open to everyone, the Benefits section is private and open only to members and retirees who were all provided with individual passwords. If you did not receive yours, please call the Union office to obtain it.

This year has been full of change. Our country has a new President and Vice President. New York City has finally started to re-open after almost 18 months of pandemic shut down. New York State’s governor resigned amidst a sexual assault scandal, and we now have our first female governor with Kathy Hochul. New York City is about to get a new mayor, and the City Council, for the first time, could very well have a majority of female members after the November General Election.

Throughout all of this, we have learned that we, as organized labor, cannot always control what goes on outside, but we can often play a part in making change. With DC 37, we supported many candidates for City Council who won their primary elections and are en route to win in November as well. These are candidates who have proven to be on the side of labor, who have shown they will support us when we need them, and we know will have an open-door policy when we come knocking.

And, throughout all of this change, we have learned that what we can control is what goes on inside of our own Local 983 house. These past couple of years have shown us that when we work together and stand together, we become stronger and more resilient. Everything we do as an Executive Board is for the betterment of our 3,000-plus members. Our Union is about you. So be sure to scroll down and sign up for our emails, our Union updates, and our newsletters. It’s the best way for us to keep in touch with you and for you to know what’s going on with your Union. 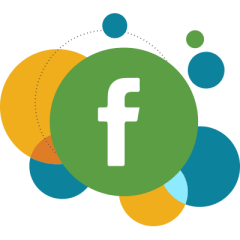 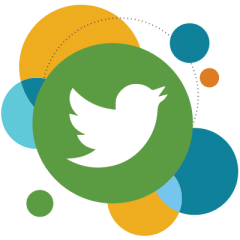 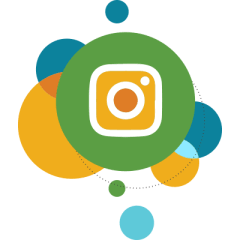 It is important for Local 983 to have the most current information on file in our office for every
Active Member and Retiree in order for you to receive important Benefits information.
Please fill out the form below and submit it to the Local 983 office.
This information is transmitted securely and kept confidential.